2014 marked our second year holding Spring into Action, a season-long series of events engaging the public in resisting mining injustices.

Here are some more details about the events we held and the protests we organized: 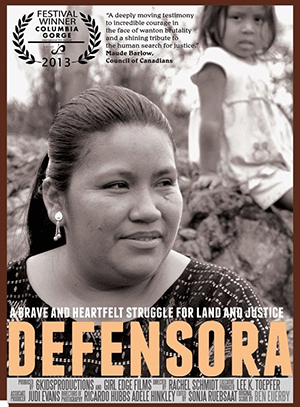 This documentary follows the Maya Q’eqchi’ community of El Estor, Guatemala in their search for justice. Members of this community allege that they have been faced with violence, forced evacuations and other human rights violations in the wake of Canadian mining expansion into their ancestral lands. The company involved is Toronto-based Hudbay Minerals. Defensora tells the story of a precedent-setting resistance movement that has successfully brought these claims to trial in Canadian courts.

The documentary was followed by a report back from MISN member Rachel Small, who had just returned from a fact-finding mission to El Estor, as well as Grahame Russel of Rights Action, the organization behind the production of Defensora. Rachel and Grahame were joined by activist Juan Carlos Jiminez and Dr. Néstor Rodríquez, a professor from the University of Toronto, who brought to light other cases of mining-related injustices throughout the Americas.

At Barrick’s annual general meeting this year, Barrick Gold is set to add David Naylor, former president of the University of Toronto, to their board of directors. Naylor was president of UofT during the signing of the controversial and secretive “Munk Contract” which established the Munk School of Global Affairs. At this event, attendees heard about how the Munk School has been used to meet Peter Munk’s foreign policy objectives so far, and learned the inside story about how this contract was approved. Attendees also engaged in a broad discussion about what these corporate relationships with U of T means for students at the university, as well as the public at large.

All were welcome (no art skills or prior experience required!) to take part in this art build to create street theatre props, paint banners, and contribute to ongoing campaigns against the destructive actions of Canadian mining companies in Canada and abroad. For those less familiar with mining issues, we also had an informal teach-in as we built.

Barrick destroys communities around the world in their pathological quest for a metal that we no longer need to mine. At this year’s Barrick AGM, we stood in solidarity with communities directly impacted by this gold mining giant! 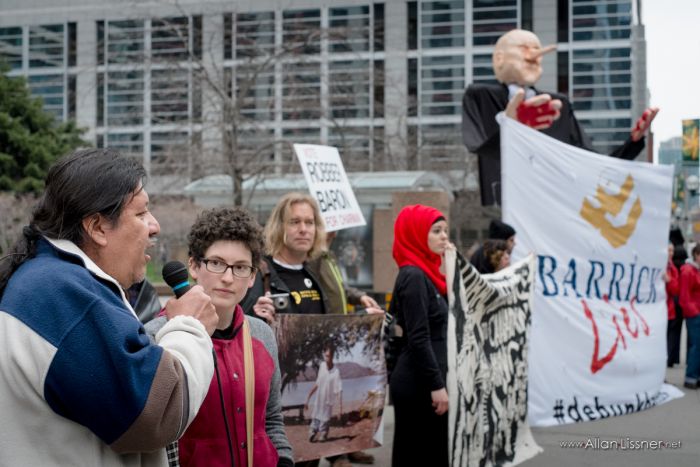 • Barrick was facing a court case in the British High Court seeking damages for the death and injury of local villagers in Tanzania.

• Communities in Papua New Guinea were making urgent calls for resettlement away from the mine site and community members were seeking compensation for killings and sexual assault.

• Communities in the Dominican Republic were also seeking urgent relocation away from the contaminated mine site, and compensation for their economic losses from dead cattle and contaminated produce.

• Indigenous Diaguita communities in Chile were fighting to stop the Pascua Lama project, which did not have their consent and had been poisoning their scarce water resources. 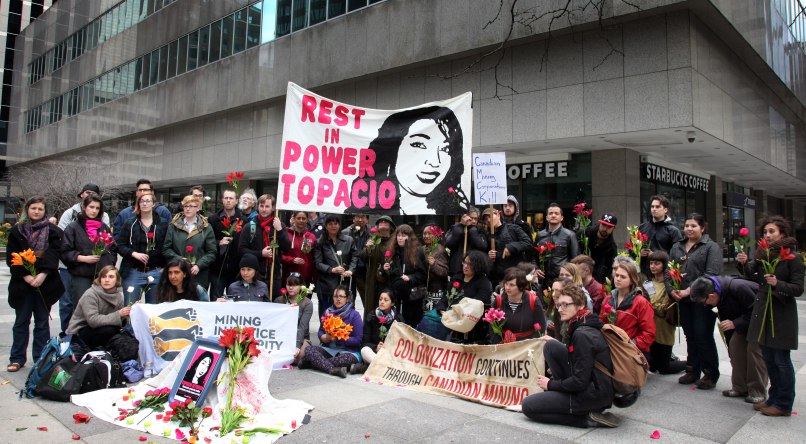 On April 13th, Merilyn Topacio Reynoso Pacheco, a 16-year old anti-mining activist was assassinated in Mataquescuintla, Jalapa, Guatemala. Her father, Edwin Alexander Reynoso who accompanied her at the time, was also shot and remains in critical condition. Both Topacio and her father were active in the resistance against Canadian company Tahoe Resources’ Escobal mine, in San Rafael las Flores, Santa Rosa. Topacio, along with her work as the Youth Coordinator of the Resistance in Mataquescuintla, Jalapa, was also a poet and musician.

This Toronto-based memorial was held to commemorate Topacio’s life and to denounce this violent and cowardly act that took the life of a vibrant young woman and community leader. It was held conjunction with a memorial held in Mataquescuintla, where her mother, Irma Pacheco spoke: “My daughter, you left your mark. I am not crying out of pain, I am crying for justice. We will fight to achieve your dream, so that one day the mining companies leave.” Topacio’s mother promised: “The resistance doesn’t end here, my love.”

Canadian company Goldcorp owns a 40% share in the Escobal mining project which Topacio and her father have been resisting in defense of their community’s right to prior consultation, self-determination and human rights. To honour Topacio’s life, her mother’s promise, and to begin to hold Goldcorp accountable, this memorial was held on the steps of Goldcorp’s Toronto office. On the same day as this memorial, Goldcorp held its Annual General Meeting.

Following this memorial, we joined the larger May Day March nearby, which included further actions to hold Goldcorp and the Canadian mining industry responsible for these and other acts of violence. 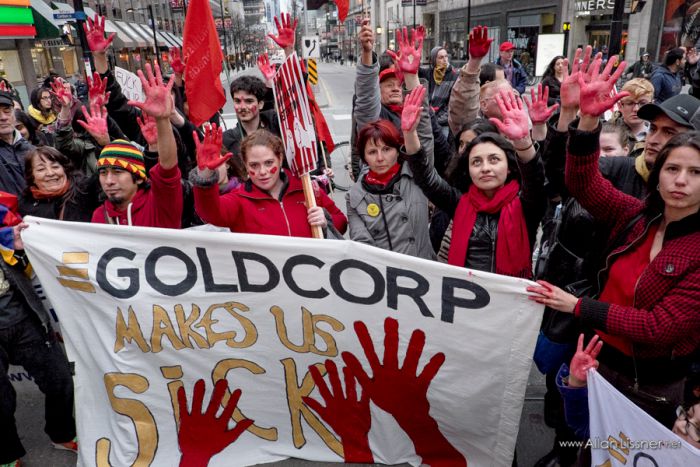 MISN headed up a Environmental Justice Contingent at the annual May Day march, marching from Allen Gardens to an action protesting Goldcorp’s AGM at Dundas Square. 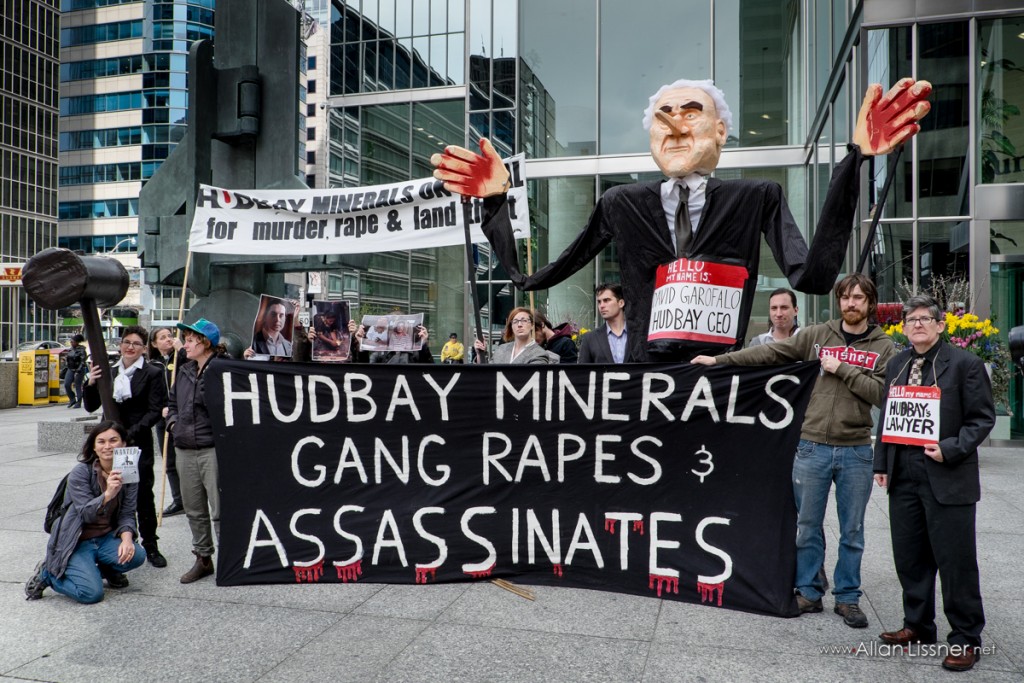 While HudBay’s shareholders met inside for their Annual General Meeting (AGM), the company and its leadership stood accused in a people’s trial outside on the sidewalk. The jury was comprised of members of the public, who deliberated on HudBay’s responsibility for grave abuses suffered by communities in Guatemala and Canada. A 15-foot puppet stood in for the defendant, HudBay CEO David Garofalo, as a judge. The people’s trial highlighted real testimonies from Indigenous Q’eqchi’ communities in Guatemala, including forced evictions, the murder of community activist Adolfo Ich and the gang rape of 11 women. The company also stood accused of violating the inherent land rights of the Mathias Colomb Cree Nation in Manitoba.

The Ontario Secondary School Teachers’ Federation District 12 Human Rights Committee hosted a one-day social forum called Action:reAction that brought together up to 300 students and educator-activists from across the city with members of the broader activist community in Toronto. In our efforts to connect with a wider audience, MISN contributed to the Youth Social Forum by providing mentorship and two creative activist workshops. This was done in recognition of the energy and passion that youth bring to our activist efforts, and in an attempt to honour this contribution!