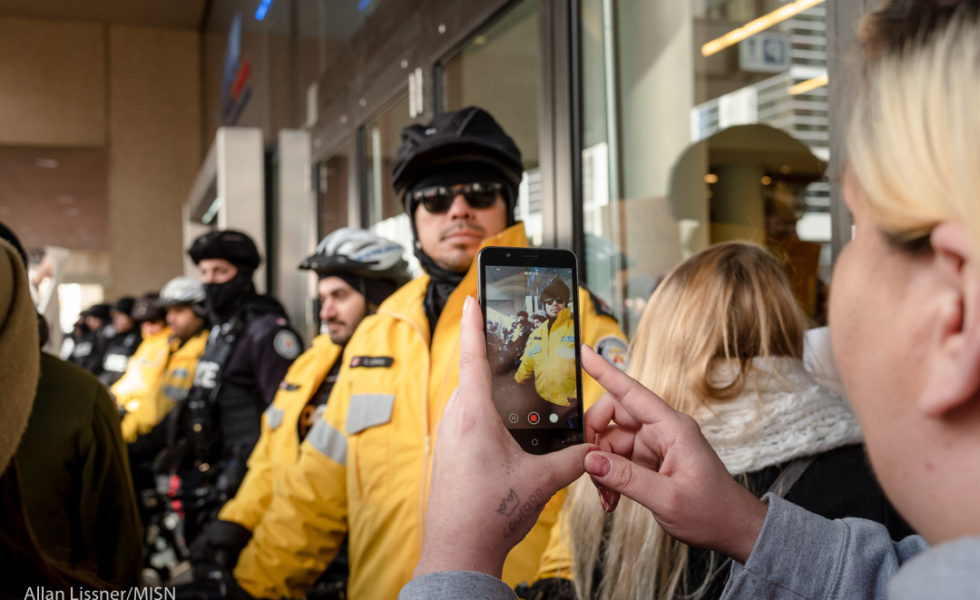 We at the Mining Injustice Solidarity Network stand in fierce solidarity with all those who are calling to defund the institution of policing in this moment of both immense devastation and immense possibility.

Defunding the police matters because Black and Indigenous lives matter. The present-day abolition movement was birthed through hundreds of years of thinking, activism, and transformative practice in Black communities facing slavery, police violence, and pervasive criminalization. Ruth Wilson-Gilmore says that “abolition requires that we change one thing, which is everything”. It is abundantly clear to us that the role of police in society is not to protect people, but to protect property, capital, and the status quo of colonial, white supremacist capitalism. This institution is not reformable. Defund, disarm, demilitarize. Abolish the police. Change everything.

Part of the mandate of the MISN collective is to combat the myth of Canadian exceptionalism, which is the idea that Canada is uniquely peaceful and welcoming of diversity, especially as compared to the United States. Canada’s policing system is just one of the many ways in which violence against Black and Indigenous people is embedded into the foundational structures of our country. The RCMP, for example, was created as an occupying force to remove Indigenous peoples from their lands, enabling ‘resource’ extraction. This racist and colonial legacy continues today, rearing its head recently through the RCMP’s brutal and violent arrest of Chief Allan Adam in Alberta.

As Torontonians, we are intimately aware that police violence and profiling is a daily fear and reality amongst Black and Indigenous people in our city. Black residents in Tkaronto are 20 times more likely to be killed by police than white people. We cannot allow the idea that American police are ‘worse’ to cause us to turn away from a dedicated pursuit of justice for those who have lost their lives to Toronto Police Services’ racism. Just a few weeks ago, Regis Korchinski-Paquet, an Afro-Indigenous woman in Toronto, died during an interaction with Toronto police. After her death, her family and community mobilized a call for a full, transparent, public and independent investigation into her death which the authorities have yet to agree to.

Regis is one of too many Indigenous, Black, and Afro-Indigenous community members whose lives were ended by police violence and allowed because of police impunity. As we speak her name we also remember D’Andre Campbell, who was killed inside his home by Peel Regional Police in April. Chantel Moore and Rodney Levi, both killed in New Brunswick by police sent to ensure their safety during a so-called ‘wellness check’. In the past 10 weeks, police across Canada have killed nine Indigenous people.

This system is not “broken”. This is the outcome of a system purposefully designed to uphold colonialism, white supremacy and capitalism. The only response is to pull resources away from the mechanisms that enact these violences and invest them in ways that nourish mutual aid, transformative justice, food and housing security, and community-led supports.


As a grassroots mining justice organization, we also see the ways that militarized policing upholds the violences of the resource extraction industry, whether it’s the RCMP carrying out forced evictions in Wet’suwet’en territory, or the policing that protects the financial district in Toronto where many companies are headquartered, or the way that police are used to repress resistance to the construction of mining projects in Canada and around the world. A great deal of the harm experienced by mining-impacted communities is enacted by local, often militarized police at the behest of Canadian mining corporations. These police brutalize. They rape. They surveil. They threaten. They contribute to bogus criminal charges being filed against community leaders. They set villages on fire as they evict people from their homes to make way for an industrial mining project. They attempt to repress the vital resistance of powerful movements of people trying to have a say in what happens to them. Communities continue to resist these violences in ways that all of us could learn from. But at what cost?

Mining companies attempt to avoid responsibility by blaming the harms we described above on the “violent” culture of the countries or communities in which they operate. But impacted communities know, and we know, that these police actions are empowered by, elicited by, funded by, and otherwise enabled by Canadian corporations, Canadian embassies in service of those corporations, Canadian government interventions into local mining laws, and free trade agreements that benefit the Canadian economy. Police violence tells us, loud and clear, what matters most to those in power, no matter where you are. Capital over human lives. Colonial white supremacy over Black power and Indigenous sovereignty. The rights of transnational corporations over the future of our planet.

We add these comments about policing and the mining industry not to decentre the vital focus on the experiences of Black and Indigenous people on Turtle Island, but rather to shed light on the vast webs of impact and potential solidarity that could be leveraged in service of building a world without policing. We call on all our allies doing environmental justice, climate justice, and anti-capitalist work to think about how the question of policing intersects with the issues you organize around, to think about what you can contribute, and to support the leadership of Black and Indigenous organizations in the fight to transform the ways we think of safety and whose safety matters. We are doing the same.

New to the idea of abolition?

If you, like us, are based in Tkaronto, here are some things you can do right now to support:

For more on our stance on abolition: Click here.