STATEMENT: Mining and the Armed Conflict in Colombia

Posted on April 9, 2015 by mininginjustice 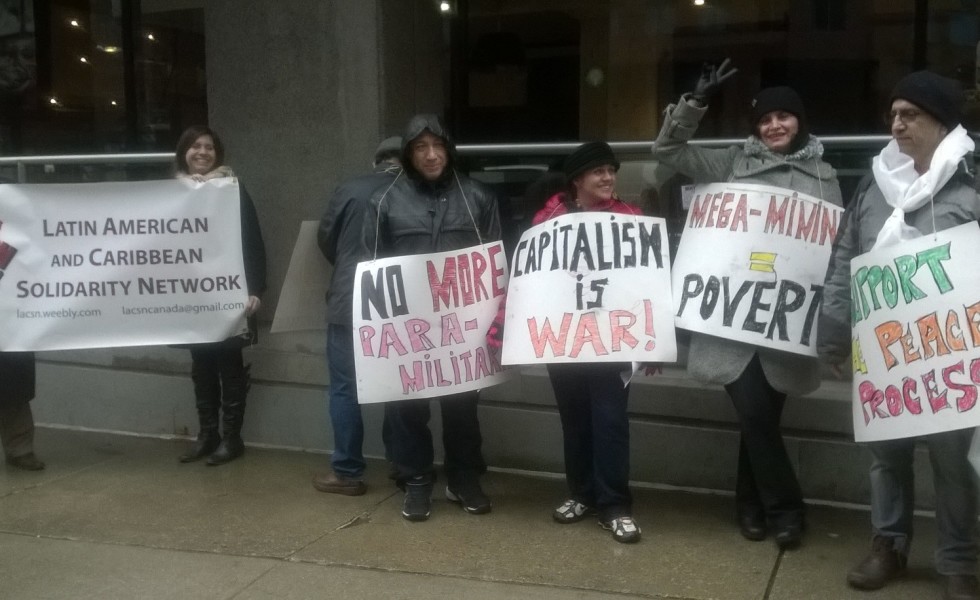 Today, a vigil was held at the Colombian consulate for the victims of the armed conflict in Colombia. The following statement was read by a representative of the Mining Injustice Solidarity Network in solidarity with those resisting Canadian mining in Colombia.

“It is impossible to think of the many victims of Colombia’s armed struggles, without thinking of the role resource extraction had on their lives and on their fates. Currently, industrial, foreign-funded mining in Colombia is promoted as a major locomotive pushing economic growth and it is promised as a beacon of development for Colombia. Nothing could be further from the truth. Government policies aimed at expanding natural resource extraction through foreign investment are in direct conflict with policies that protect ecologically sensitive areas, the rights of campesinos, Indigenous and Afro-Colombian Peoples, land restitution and the protection of areas for agricultural use. In reality, Colombia risks giving its natural resources away at great social, environmental and human rights costs.

Armed conflict, targeted assassinations and forced displacement are directly related to the economic interests tied to natural resources. Reports and investigations continuously remind us that areas rich in natural resources, such as coal, petroleum and gold, are militarised and paramilitarised. The military protects mostly foreign private investment and paramilitaries suppress social protest and displace people from their homes through violence and fear. We have seen the creation of special army government units that exclusively protect infrastructure and industrial installations. These same units have been linked in human rights violations committed directly or in tandem with paramilitary forces. These same intimidation and silencing tactics used by Drummond, and British Petroleum, are now being used by Calgary-based Talisman Energy, Toronto-based Gran Colombia Gold, Houston-based Occidental Petroleum, South-Africa’s Anglo Gold Ashanti and many others who have set foot on our Colombian geographies.

Today, as we remember the countless victims of Colombia’s armed conflict, the many brave men and women who have stood up to defend their territories, labour rights, indigenous rights and environmental rights, lets also remember the economic reasons that determined their fate, and the powers that continue to benefit from Colombia’s internal armed struggles.”