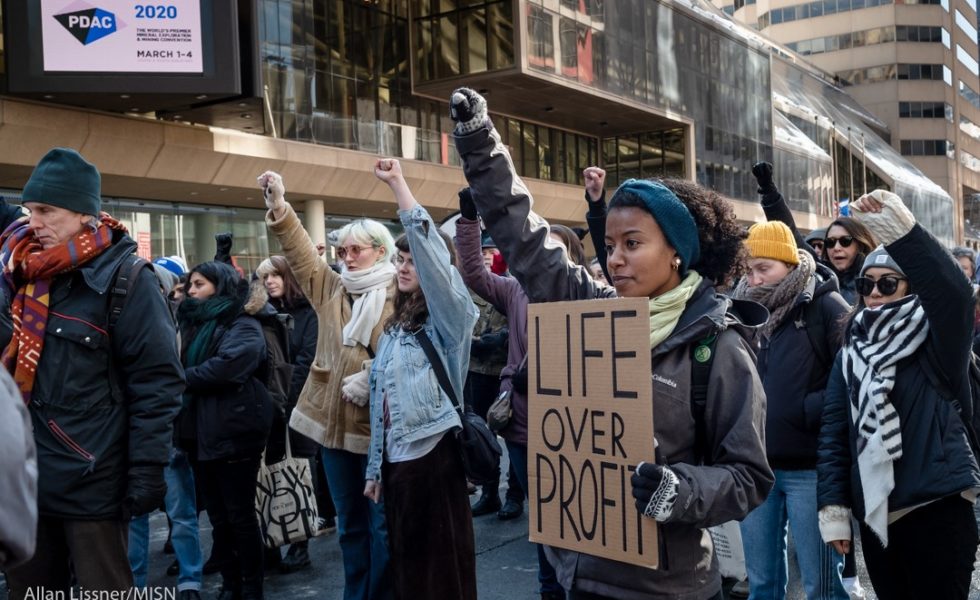 On March 1st, the world’s largest mining convention (PDAC, or the Prospectors and Developers Association of Canada) began in Toronto, as it does every year. In response, we gathered alongside over 500 people outside the Metro Toronto Convention Centre in solidarity with every community on Turtle Island and beyond that has found itself staring down the barrel of a gun for opposing Canada’s ongoing colonial project through violent resource extraction. This rally was planned by a loose coalition of a dozen allied Toronto groups and endorsed by over 50 organizations and groups who all supported our mission to disrupt PDAC in demand of the following:

With this mission in our hearts, we came together en masse and it was big and beautiful!

On Sunday March 1, together we:

Below is a selection of photos from the rally taken by Allan Lissner.
Michael Zender posted a beautiful photo album here.
Scroll down below the photos for a media round-up, additional disruptive actions, and more.

Here are some of the best pieces that were written about the rally:

All of Toronto’s mainstream media outlets covered the rally and included our messaging! Some pieces that were published include:

And, of course, the rally was covered by our “friends” at mining.com: Anti-mining protesters block entrances to PDAC annual convention

We also managed to briefly hijack the coverage of Justin Trudeau’s speech the following day at PDAC:

Throughout the rest of the four-day convention, we kept the heat on PDAC:

This year we saw an incredible surge of interest from community members and activist groups across the city who see common cause in coming together when powerful decision-makers who are destroying our planet and the values that we stand for gather. When they gather, we will be there to disrupt business as usual! PDAC is just one of many manifestations of the broader crisis that we find ourselves in, of violent capitalism, colonialism, displacement, and corporate impunity. The good news is, people across the world seem to be waking up and realizing that this world needs to change now, and they are joining the rest of us who have known that for a long time in doing something about it. Thank you to everybody who worked so hard in bringing this one moment into reality – we look forward to creating much more with you.

Until next year, with love: