The verdict is in! Solidarity rally against corporate bullying!

Posted on October 11, 2016 by mininginjustice 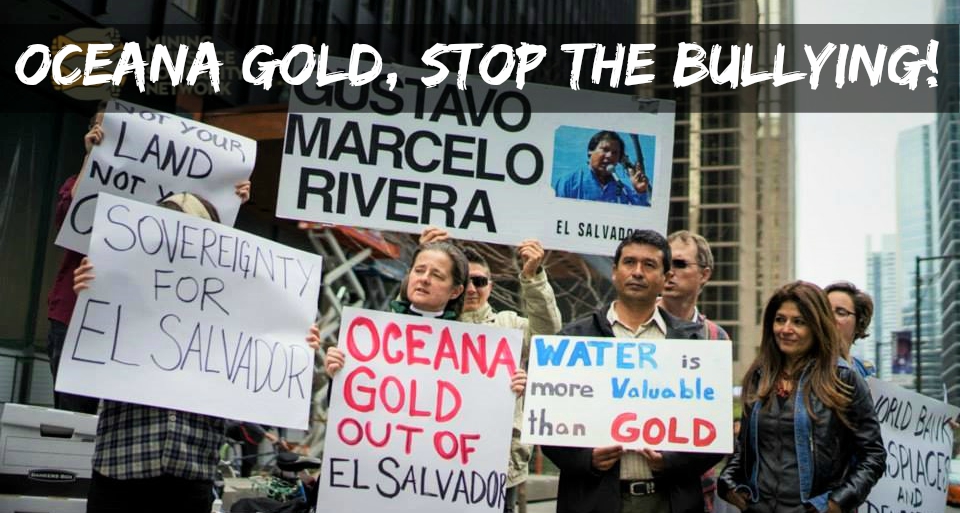 We’ve been waiting seven years for this day to come! The results are finally being released THIS FRIDAY from a never-ending David-and-Goliath “trial” – Canadian-Australian mining company OceanaGold versus an entire country standing its ground against corporate bullying! Whatever the results, we need Toronto to show up with rage, solidarity, and a resounding declaration that there can be no ‘winners’ when the mechanisms of justice are fundamentally corrupt!


El Salvador has been sued for US$250 million at a World Bank tribunal by Canadian-Australian mining company OceanaGold after the company was denied a mining permit for which it never met regulatory requirements. In these private tribunals, corporate lawyers – not judges – decide whether governments must pay corporations for halting destructive mining projects. The verdict will be announced on Friday, but we know that whatever is decided, the people of El Salvador have already suffered enormously at the hands of OceanaGold/Pacific Rim, and justice wont be realised until these trade agreements that allow for corporations to bully countries are terminated.

Please join us on Friday to support the years-long struggle of the Salvadoran people and to tell Chrystia Freeland, Minister of International Trade: “Trade agreements are a weapon against communities! Community consent over corporate bullying! La lucha sigue; the struggle continues!”

More details about this case and why we are gathering below.

In 2008, after years of violence, conflict, environmental degradation, and water pollution at the hands of mining companies, then-president of El Salvador Antonio Saca stopped issuing new mining permits. This decision has widespread support in El Salvador; a recent poll of the University of Central America (UCA) indicates that that 79.5% of Salvadorans are against any gold mining.

In 2009, after pleading with El Salvador to reconsider, OceanaGold (then called Pacific Rim) sued the whole country through an “investor-state dispute settlement” (ISDS) case at the International Centre for Settlement of Investment Disputes (ICSID), the World Bank Group’s arbitration venue. The charge? “Loss of potential profits”. These types of suits are increasingly possible under free trade agreements, including ones currently being negotiated by our government (for example: the TPP and CETA).

If OceanaGold wins, the Salvadoran people will be required to pay $250 million USD, a morally reprehensible demand. Already, in the seven years that this arbitration has gone on, $12 million USD in legal costs have been incurred, which is enough to pay for over two years of adult literacy classes in El Salvador.

Despite hearing that the verdict could be released “any day now” for over a year, we have been told with confidence by the lawyers on the case that the tribunal will announce its decision at noon on October 14th. Join us just a few hours later as we share the decision and call out Canada’s complicity in this act of corpoprate bullying!

Given the current global economic context, none of this is surprising: Canada is home to over 75% of the global mining industry, and this is because the Canadian government provides very little in terms of accountability mechanisms for communities impacted by the mining industry and actively promotes this industry’s interests through trade agreements, investment treaties, and foreign policy. ISDS mechanisms found in trade agreements like the North American Free Trade Agreement (NAFTA), the Canada-European Union Comprehensive Economic and Trade Agreement (CETA), and the impending Trans-Pacific Partnership prevent governments like that of El Salvador from saying no to foreign investments that threaten the environment and health of local populations.

The number of investor-state suits like these has ballooned in recent years. As of 2013, there were 169 investor-state suits being heard at ICSID, up from only 3 in 2000. About 35% were brought by oil, gas, and mining firms and nearly 50% of all 169 suits were against Latin American governments.

These suits take place far beyond any democratic process or court system and undermine democratic decision-making and regulatory measures that protect the public interest in El Salvador, in Canada, and around the world.

← A powerful demonstration of solidarity in support of women land defenders
Update: The verdict is in: Solidarity rally against corporate bullying! →