Posted on June 2, 2016 by mininginjustice

Donate to this new award to honour Topacio’s life and support further resistance!

We are thrilled to announce that we are partnering with our allies at Breaking the Silence to initiate the Topacio Reynoso Youth Award to recognize a youth group in Guatemala that is working for social and environmental justice that keeps true to the vision and life of Topacio. In 2016, the inaugural award will be presented to Jodvid, an inspiring youth organization created by Topacio’s family and friends which is continuing the fight against Tahoe’s disastrous mining projects in their region. 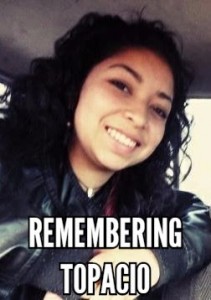 Topacio Reynoso was a vibrant, smart, creative, hardworking, artistic, poetic, musical 16 year old when her life was taken during an April 13, 2014 armed attack that also left her father, Alex, in serious condition. A daughter, sister, friend and activist, Topacio was part of a community and family that has adamantly resisted Tahoe Resources mining projects in Guatemala. She had organized other youth in her community to talk about the impacts of mining on their lives and futures before she was murdered by unknown assailants. There  has been no thorough investigation into Topacio‘s murder or the numerous attacks on Alex’s life.