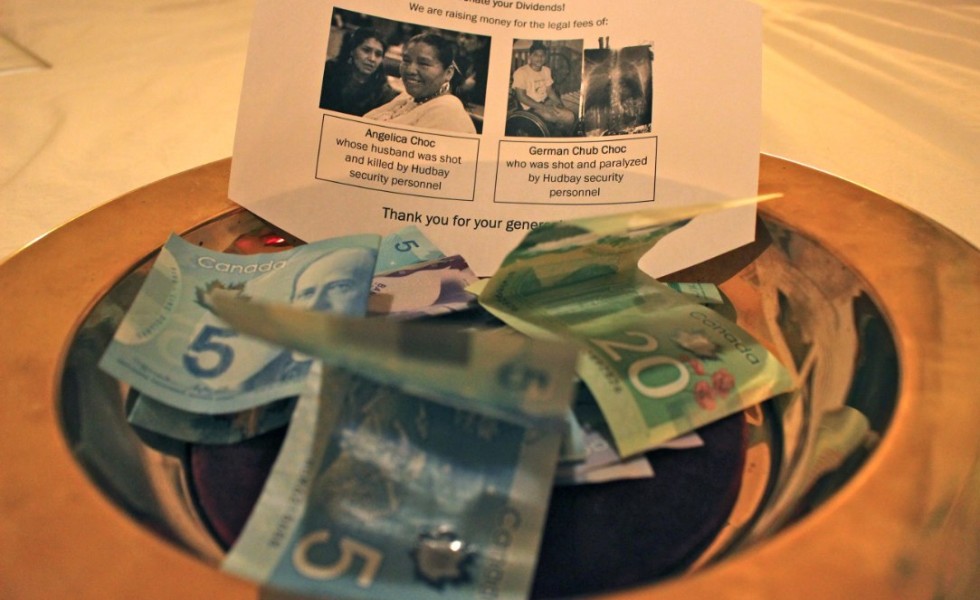 Toronto, Canada: Shareholders at Hudbay Minerals’ annual general meeting this morning were asked to donate their dividends to the legal fees of Angelica Choc and German Chub, who both allege violence on the part of Hudbay security personnel near Hudbay’s mine in El Estor, Guatemala. A collection plate was passed to gather funds for the criminal cases proceeding in Guatemalan courts against Hudbay Minerals security, accused of shooting German Chub and murdering Adolfo Ich Chaman, Angelica Choc’s husband. Angelica Choc and German Chub are plaintiffs in these costly criminal proceedings in Guatemala that have been drawn out for nearly six years.

Rachel Warden of KAIROS spoke to shareholders at the meeting, stating, “[The facts of Angelica and German’s case] are now quite well known in Canada and internationally because of publicity around this case including a recent article in the New York Times. But what has received less attention are the costly legal proceedings taking place in Guatemala simultaneous to the trial in Canada. These have stretched over six years with no justice in sight. Victims have to travel long distances from their communities to appear in court and very often at the last minute the proceedings are postponed or cancelled, forcing the victims to assume the hardship and the costs of travel. Added to this are the legal fees. This trial in Guatemala has been characterized by incompetence, racism and inefficiencies and the victims have had to pay the costs. Not only do the victims face a lack of justice in Guatemala, they also face the crippling costs of a trial that is stacked against them.”

Hudbay Minerals is also currently being sued in precedent-setting civil lawsuits in Toronto courts, representing the first time a Canadian mining company has been brought to court in this country for crimes committed overseas. The 11 plaintiffs in the Canadian civil case are all members of Indigenous Mayan Q’eqchi’ communities from El Estor, Guatemala and are all victims of repression (including murder, a shooting-paralyzing and the gang-rapes of 11 women villagers) allegedly carried out by and for Hudbay Minerals and its subsidiary company CGN in relation to their Fenix nickel mine. Hudbay Minerals dismissed these charges in their 2015 Annual Report, stating: “We believe that all of the claims with respect to the Fenix project are without merit.”

Maggie Helwig, an Anglican priest, passed the collection plate and was immediately physically removed from the building. No shareholders opted to donate money. “None of the shareholders would even touch the collection plate and they actively avoided eye contact. They acted like we were trying to hand them a pile of garbage”, observed Mining Injustice Solidarity Network (MISN) member Kate Klein. Merle Davis, another MISN member, was also physically removed from the building and commented: “It is no coincidence that I was removed for attempting to videotape CEO Alan Hair’s evasive response to a shareholder asking whether Hudbay would be accountable for its crimes. This company is allergic to accountability and has avoided it at every turn.”

Hudbay Minerals, a Toronto-based company, has mines across the Americas that are marked by violence, conflict, and environmental harm. They have faced substantial opposition and resistance to each of their mines. Hudbay has sued the Mathias Colomb Cree Nation, impacted by the Lalor Lake and Reed Lake mines in Manitoba, for resisting their operations as the First Nation asserts their right to live off of and protect their land and waters. Many civil society groups and Indigenous nations have opposed Hudbay’s Rosemont mine in Arizona, including the Hopi Tribe and the Tohono O’odham Nation, the Pima County and Santa Cruz County Boards of Supervisors, the towns of Oro Valley, Marana, Sahuarita, and Patagonia, the Green Valley Community Coordinating Council, and the City of Tucson. In March, Hudbay was forced to put this project on hold. The Ayllu of Uchuccarco, an Indigenous people in Peru, have censured Hudbay for failing to keep its promises, and for instead contaminating ecosystems and rivers on Ayllu traditional lands through its Constancia mine. This January, thousands of people from other communities around the Constancia open-pit copper mine held a 72-hour protest outside of the mine site.

Sydney Lang, member of the Mining Injustice Solidarity Network commented, “Hudbay’s shareholders directly benefit from the company’s violent practices. We think it’s only fair that they should share some of these benefits with those negatively impacted by the company’s mines.”