A powerful demonstration of solidarity in support of women land defenders

Posted on September 30, 2016 by mininginjustice 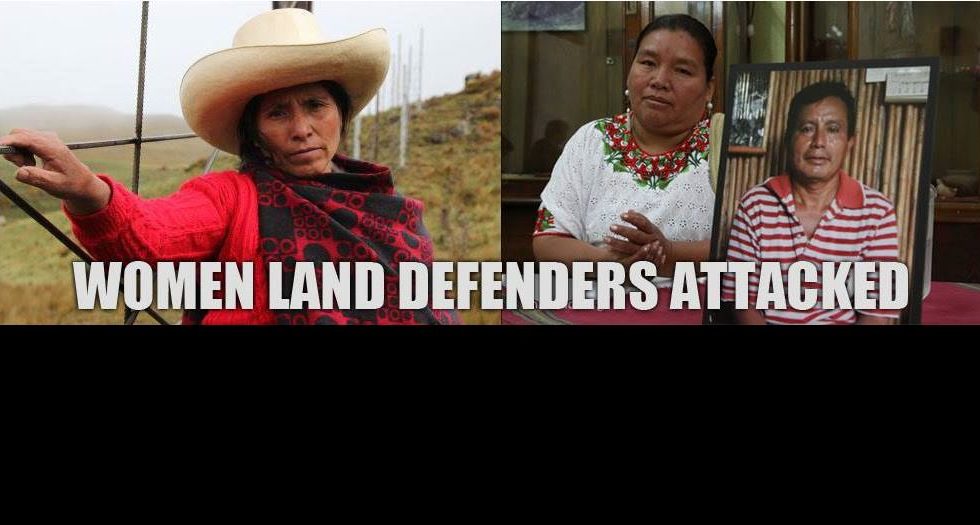 In an amazing expression of solidarity, hundreds of individuals and organizations signed a letter in solidarity with women land defenders. This letter was sparked by recent and ongoing attacks against women land defenders who, at great personal risk, continue to speak out and work tirelessly in defense of community rights to water, life and territory.

These individuals, solidarity groups, and social and environmental justice organizations are deeply concerned about the rising number of attacks against land and environment defenders throughout Latin America, particularly at the hands of multinational extractive companies and related actors, often taking place with impunity.

On the weekend of September 16th, gunshots were fired at the home of Anglélica Choc, a plaintiff in a series of law suits currently being tried in Ontario courts against HudBay Minerals for negligence in connection with violence at the Fénix nickel mine project in El Estor, Guatemala between January 2007 and September 2009. Choc has been pushing forward in the search for justice in Guatemala and Canada for the murder of her husband Adolfo Ich on September 27, 2009 allegedly at the hands of company security guards.

The same weekend that Angelica Choc’s home was attacked, Goldman Environmental Prize winner Máxima Acuña was beaten and left in serious condition after an armed attack at her home in Cajamarca, Perú. Máxima has been subject to a series of threats and intimidation associated with her persistent resistance to the Conga mine project owned by US-based Newmont Mining.

The solidarity statement expresses ongoing concern for the safety and well being of all people who continue to struggle against harmful impacts of large-scale mining and oil projects.  It was hand delivered to Angelica Choc and will also be shared along with a letter to Canadian authorities calling for Canada to be Open for Justice and for respect for Indigenous self-determination and community consent prior to any mining, or other large-scale project being undertaken, funded or promoted in any way.

International Solidarity with Women Defenders and All Defending Water, Land, Life and Territory

We, the undersigned, express our solidarity with Angelica Choc and family after gunshots were fired against her home on Friday, September 16, 2016. The attack occurred just after midnight. Four bullets impacted the walls of her home, where Angelica and two children were sleeping. This most recent attack comes as the criminal trial in Guatemala for the murder of Angelica’s husband, Adolfo Ich – which took place on September 27, 2009 – nears its conclusion, and as the civil case in Canada against HudBay Minerals for negligence in connection with this and other serious human rights violations moves forward.

We are deeply concerned about the rising number of attacks against land and environment defenders throughout Latin America, particularly at the hands of multinational extractive companies as recently reported by Amnesty International. An alarming number of these victims are Indigenous women. We hold responsible not only the companies implicated in these acts of violence but also the home and host countries for supporting in multiple ways the expansion of corporate and investor interests while turning a blind eye to repression, human rights violations and environmental harms linked to those same economic interests. The serious threats against Angelica and others involved in the case have been repeatedly denounced both nationally and internationally and we continue to support her courageous and dignified struggle for justice in the murder of her husband.

Angelica’s husband, Adolfo Ich, was an Indigenous Maya Q’eqchi’ ancestral authority and teacher in his community of La Union, El Estor. On the day he was murdered, he heard gunshots from a nearby soccer field, where protesters had gathered in response to fears of further illegal land evictions to be carried out by police and private security guards on behalf of the Canadian company HudBay Minerals and its then Guatemalan subsidiary, Compañía Guatemalteca de Níquel (CGN).

As a respected member of his community, Adolfo went to the area to restore calm. He was recognized as an outspoken opponent to the mine, and according to eyewitnesses, was attacked upon arrival by mine security, led by Mynor Padilla, former military colonel and head of security for HudBay Minerals/CGN at their Fenix nickel mine project at the time. Adolfo was beaten, attacked by machete and shot. He died from his injuries.

The criminal trial against Mynor Padilla, who is accused of murdering Adolfo and causing serious injury to German Chub, has dragged on for more than one and a half years in Guatemala. Earlier this year, the judge – claiming that she felt threatened – ordered a closed-door trial, and since then, no press or international or national observers have been allowed to attend. The trial has been riddled with procedural and substantive irregularities, as well as allegations by the plaintiffs of racism by the judge. The long and arduous proceedings have caused serious personal and economic hardship to Angelica, her family and supporters, and lawyers. This is not the first attack against Angelica and she has denounced others since the criminal trial opened in Guatemala in March 2015.

Throughout Latin America, on a regular basis, people defending water, land and life are being killed, attacked, threatened, and persecuted.

In Brazil, Nilce de Souza Magalhães, known as Nicinha, was murdered in January 2016 after continually denouncing human rights violations committed by the consortium responsible for the Jirau hydro-electric project, Energia Sustentável do Brasil (ESBR). Nicinha, a leader from the Movement of Persons Affected by Dams (MAB), was part of a fishing village that was trying to protect the river and their livelihoods. As a result of her leadership and struggle, she was tortured, bound and murdered before being tied to a rock in the river.

In Honduras, Indigenous Lenca leader Berta Cáceres, winner of the prestigious Goldman Prize was murdered in March 2016 for her work defending rivers in Lenca Indigenous territory against the Agua Zarca dam project. Fellow activist and head of Otros Mundos/Friends of the Earth Mexico, Gustavo Castro Soto, narrowly escaped a point-blank range shot in the same attack. Berta was the leader of the Civic Council of Popular and Indigenous Organizations of Honduras (COPINH) and since her murder, two other members of COPINH, Nelson García and Lesbia Janeth Urquía, have been killed. Threats and attacks against COPINH for their resistance to multinational hydro-electric dams and mining concessions in their territory continue. As part of a marred and unsatisfactory investigation, six men have been arrested so far for Berta’s murder, including two with direct ties to the Honduran Energy Corporation (DESA). Berta’s family and COPINH question the investigation, worried that it will not lead to convictions or the real intellectual authors of her assassination – who they believe are in the highest levels of government and the military – being identified and held to account.

In Peru, on the same weekend that Angelica Choc’s home was attacked, another Goldman Prize winner was beaten and left in serious condition after an armed attack at her home. Farmer and outspoken opponent to South America’s largest gold mining project, Maxima Acuña de Chaupe, and her partner Jaime, were severely hurt by armed men on September 18. Acuña’s daughter reports that the attack was led by security of Yanococha, a subsidiary of US-based mining company Newmont.

In Mexico, Esperanza Salazar, the coordinator of Bios Iguana A.C., and a member of the Mexican Network of Mining Affected Peoples, was recently forced to abandon her home and work in the state of Colima because of constant threats and intimidation. Esperanza and other members of Bios Iguana have faced stigmatization and threats from businessmen and state actors over the last few years as a result of their work with the Indigenous Council in Defense of Territory in Zacualpan, Colima. The Indigenous Council faces serious ongoing threats and aggression as a result of their opposition to mining and hydroelectric concessions on their land.

In Guatemala, just two months ago, Aura Lolita Chavez, from the K’iche’ Peoples Council in Defense of Life, Mother Nature, Land and Territory, who has received numerous death threats and attacks, was publically threatened for speaking out against massive clear- cutting taking place in K’iche’ territory.

This September 27, 2016 is the seventh anniversary of the murder of Adolfo Ich. On this day, we reiterate our solidarity with Angelica Choc and her family and express our grave concern for her and the many others who are courageously defending their lives and territory against large-scale extractive projects despite the serious risks they face for doing so. We urge respect for communities’ rights to say “no” to such projects and we condemn the use of force – political, legal and physical – to implement projects against the will and without the consent of those affected.

We wholly reject the use of threats, intimidation and violent attacks by governments and companies to repress and try to deter legitimate resistance to their projects. We demand that justice be served, and that those responsible for such attacks – including the intellectual authors – should be held responsible and land and environment defenders obtain just reparation. Furthermore, we call for all necessary measures to be taken to ensure the safety of Angelica Choc and all the brave women and men who are fighting to defend their land and the wellbeing of their communities.

← Extraction! A comic Book Launch & Fundraiser for MISN
The verdict is in! Solidarity rally against corporate bullying! →